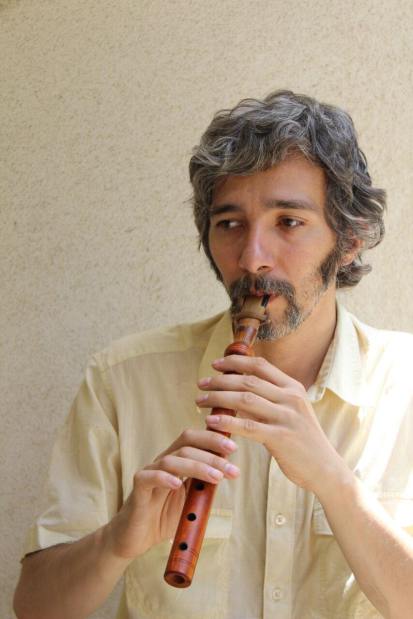 Mir Shahabeddin Chilan is a multi-instrumentalist with two Master degrees in Music Composition and Creative Music Therapy. He has performed on French horn with the Tehran Symphony Orchestra and is the conductor of a multicultural choir in Sydney, Australia. His research has focused on music and culture of different ethnicities in Iran and also explores the use of music therapy for treating PTSD in Syrian and Iraqi refugees in Australia. The implication of multiculturalism in music and society is a topic that occupies his mind while he is not writing or performing music.

Holger Deuter is an artist, writer, director and teacher who works with film, animation, virtual reality, and sound. Since March 2009 he is employed as a Professor for Virtual Design at University of Applied Sciences, Kaiserslautern (FH-KL) and has an honorary position at University of Technology Sydney (UTS) as a visiting Professor since 2016. His research is focused on the sensing of human articulation and real-world data for the design of virtual and augmented spaces. Deuter has worked in Design Agencies, Filmproductions, Universities, Media-Institutes around the world and established a track record of cutting edge Media Art Projects as a specialist in Motion Capture, Animation, and Virtual Environments. In 2012 Holger co-founded tranSTURM, an interdisciplinary art collective with Chris Bowman, Mike Day and Anita Kelly.
He was trained as a Fine Artist, Photographer, Illustrator and played 5 years with the experimental jazz band Grey Eminence before he began his design career.
https://vimeo.com/user16549157

Fábio Furlanete is saxophonist, improviser and music educator. He is associated professor at the Music and Theater Department of Universidade Estadual de Londrina (UEL), in Brazil, where he works since 1999. There he is also director of the Collective of Contemporary Free Improvisation (CLIC in Portuguese acronym). His time is divided between performing, teaching and writing about music improvisation, aesthetics and philosophy of music.  From 1988 until he took up his position at UEL, he worked in São Paulo city as a performer in studio recordings and night clubs following popular singers or playing with Jazz ensembles.

In 1996,  Fábio graduated in with a degree Music Composition and Conducting at Universidade Estadual Paulista (UNESP) with a monograph about the orchestral work of Anton Webern and an artwork in Computer Music developed at PanAroma Studio. He received his Master Degree in Communication and Semiotics from Pontifícia Universidade Católica de São Paulo (PUC-SP) with a dissertation about the impact of computer interfaces in contemporary music compositional thinking. In 2010, he got his Doctor degree in Music from Universidade Estadual de Campinas (UNICAMP) with a thesis about the use of Massively Multiplayer Online Role-Playing Games (MMORPGs) as a model for collective musical improvisation.

Bukhchuluun Ganburged is a Mongolian musician and throat singer who plays a range of traditional and indigenous instruments. He is an accomplished improviser and has toured internationally with the Khan Bogd and Morin Huur Ensemble. Website 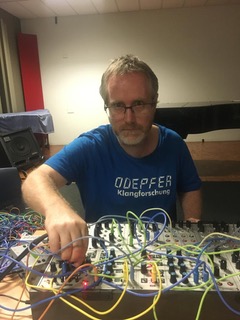 Adam Hulbert is a video and audio modular synthesist and field recordist based in Bondi, NSW. He founded the S.C.H.E.M.E modular synth ensemble, whose early work included a ground-breaking collaboration between eight modular synthesists and an Indonesian Gamelan ensemble. His penchant for experimentation has led to a range of public art installations, free improvisation performances and long-form radio programs. He is currently composing ambient music to assist with sleep, which is on its third season with the Australian National Broadcaster, ABC. He convenes the Sonic Arts stream at the University of New South Wales. 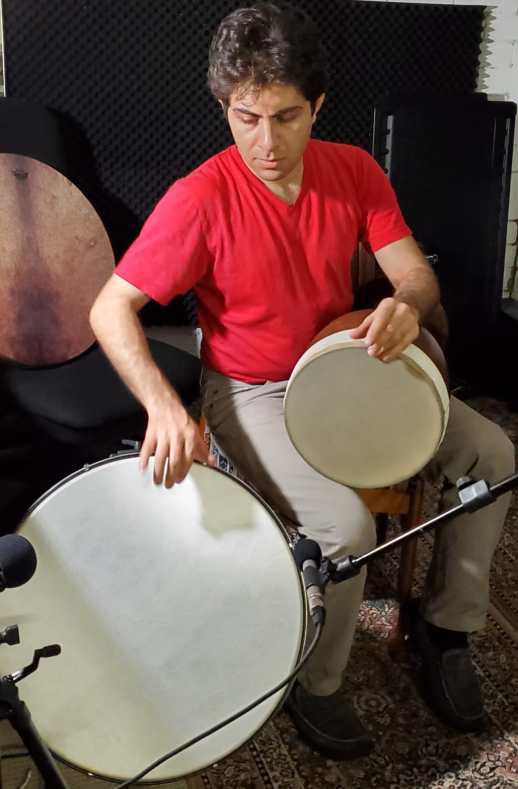 Mostafa Odabaee was born in Tehran Iran in 1983 and moved to Australia in 2005. He began playing Tombak (a single-headed goblet drum) at the age of 20 mentored by Master M. Esmaeili. Mostafa also took music theory and Tombak lessons under the instruction of Master P. Hadadi. He has been involved in different music bands such as Sufi Art Group,  May Group, Hezar Ava Ensemble, Jazzab, Kimia Ensemble, and Delnava Ensemble whi have been touring Australia since 2008.

Roger Mills is a musician, sound artist, and writer whose practice and research focuses on networked music performance, improvisation, sound and music composition, and radio.  He is the musical founder of  Ethernet Orchestra, with whom he explores the creative and cognitive challenges that musicians face when engaging in networked intercultural improvisation. The ensemble informs his research at the University of Technology, Sydney (UTS), where he researches collaborative interaction in networked and digitally mediated environments. His recent publications include a book about online jamming published by Springer (2019) and a chapter, Rhythm, Presence, and Agency: Defining Tele-Collaborative Space as a Site for Net Music Pedagogy. In Busch, T., Moormann, P. & Zielinski, W. (Eds.): Musical practices and virtual spaces, (pp. 80-90). Munich: Kopaed (2020 in process). For more information please see  Website

Hervé Perez is an improviser, sound and visual artist who performs spontaneous compositions with a laptop, using processed field recordings as well as acoustic instruments. His work is influenced by electro-acoustic, contemporary music, experimental electronics, free improvisation, immersive sound art and ancient techniques of sound therapy alike. His research approaches sound as vibration, the relation between sound and objects or spaces, architecture and the body. Hervé’s use of field recordings is concerned with frequencies (wavelengths) and harmonic relationships found in nature, how they relate to the physical world, and how the sounds of natural elements connect to our own cycles. Soprano saxophone performances focus on extended techniques and abstract peripheral sounds structural to the instrument as a physical resonant object – although he has been known to play melodies at times…Website 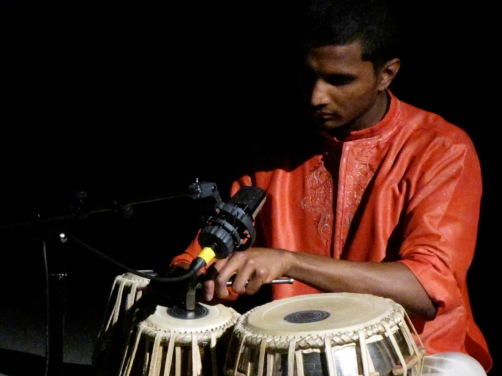 Shaun Premnath is a multi-instrumentalist and improviser in a wide range of music styles. Starting formal training on the piano at an early age, he has since diversified, teaching himself guitar, tuba, harmonium, and violin. He is trained in classical tabla and Hindustani voice, receiving formal training from acclaimed and award-winning tabla player, Bobby Singh and from the late Dr. Arun Apte, a student of the late Pt. Jitendra Abhisheki respectfully. Shaun has performed at various functions for Hindi Festivals, radio voice recitals as well as providing music for theatrical productions and concerts. Having completed the HSC Music Extension 1 with a composition major, he has also composed additional background music for Vishwaas Productions theatrical production “Gandhi: The Power Of One”, and then became a music director in the Chinmaya Mission production “Journey of a Master”. He has also worked with the Vishwaas Productions Band and helped provide music accompaniment for the Jaffna Hind College OBA Sydney singing contest, Geethavani, 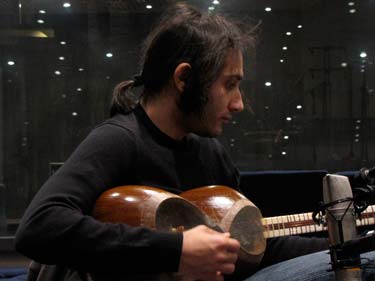 Aref Toloei is a musician, composer, and educator who holds a degree in Performing Persian instrument (Tar) from the Art University of Tehran, and a Masters in Contemporary Improvisation from Macquarie University, Sydney. Inter-cultural interests made him travel to India and research Hindustani music in Varanasi. He currently lectures in performance at the Chavoosh Institute, Tehran, Iran.

Ahmet Yavuz Uydu is a multi-instrumentalist from Adana, Turkey with a background in Turkish classical singing. He has composed for both film and television and recently performed with Rafet El Roman at the Enmore Theatre. He performs with Oud, Bendir, Cumbus, and electric bass.

Chris Vine is an artist and musician who studied fine art in Britain and the USA. He began playing improvised music in his teens as part of the UK free improvisation movement and was associated with the downtown music scenes of New York and Washington D.C. in the early 1980s, working with Elliott Sharp, Bobby Previte, and Bob Boilen. He formed the Heat Poets in partnership with the open field poet Chris Torrance in Wales in 1985. Vine was guitarist with Ted Milton’s cult punk jazz group Blurt throughout the 1990s. At this time, he was active in Welsh Experimental Theatre as a sound designer and composer, working with companies such as The Centre for Performance Research and Earthfall. He is currently based in Brazil, where he works in collaboration with various companies, including Verve Companhia de Dança. Chris Vine on SoundCloud

The late Richard Lainhart was an award-winning composer, filmmaker, and author – a digital artisan who worked with sonic, visual, and textual data. Since childhood, he was interested in natural processes such as waves, flames, and clouds, in harmonics and harmony, and in creative interactions with machines, using them as compositional methods to present sounds and images that are as beautiful as he can make them. His compositions have been performed in North America, Europe, Australia, and Asia, and recordings of his music have appeared on the Periodic Music, Vacant Lot, XI, Tobira, Infrequency, VICMOD, Periphery, Monochrome Vision, and ExOvo labels, as well as a variety of netlabels. Besides performing his own work, he has worked and performed with John Cage, David Tudor, Steve Reich, Phill Niblock, David Berhman, Rhys Chatham, Harley Gaber, and Jordan Rudess, among many others. Lainhart’s animations and short films have been shown at festivals in North and South America, Europe, Asia, and online. Examples of his music and digital artworks may be found at his website, his live performances are available at http://soundcloud.com/rlainhart, and his short films are available at http://www.vimeo.com/rlainhart